The work of a pioneering Dundee politician and activist is being celebrated by Abertay University today marking the 100th anniversary of a remarkable ‘letter to the future’ written for a 1921 time capsule.

Annie K Lamont studied Telegraphy and Telephony - the early precursor to information technology - at Dundee Technical Institute (now Abertay University) in 1904 and went on to become a trailblazer for women in politics in the city.

Today marks 100 years to the day that she penned a letter for inclusion in a time capsule collated by her employer, the General Post Office in Dundee, which included a series of uncannily accurate predictions for the future. 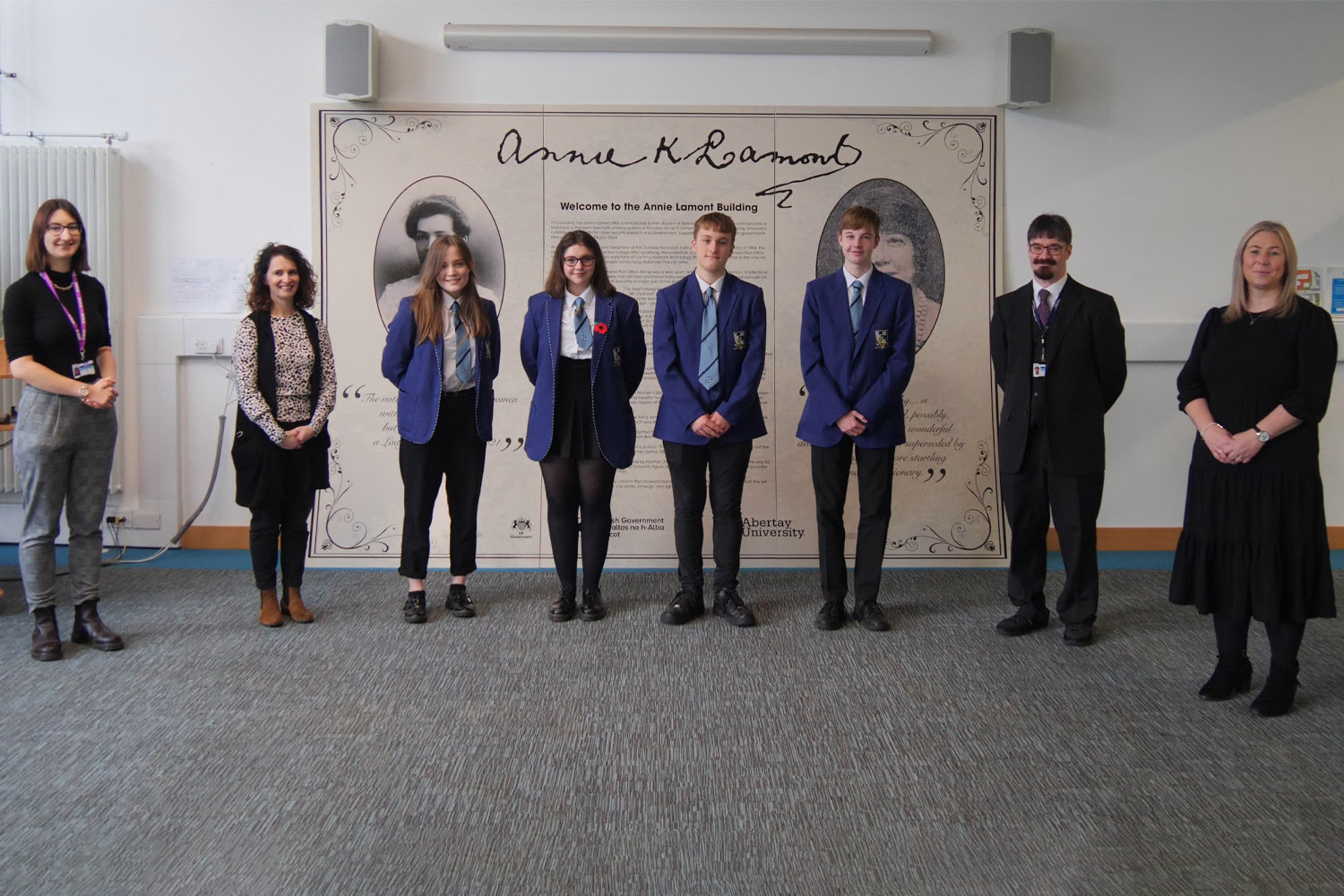 An information board sharing the story of her role in public life, her letter and her poetry was today unveiled at Abertay by pupils from Grove Academy, who were involved in researching her past with the University’s Archives team as a part of the recent Abertay 25 community engagement project.

Next year, the institution’s ‘cyberQuarter’ cybersecurity hub, including a new campus social space, will be named the Annie Lamont Building in her honour.

Dr Natalie Coull, Head of the Division of Cybersecurity at Abertay University said: “It is a truly fitting tribute to the legacy of Annie Lamont that we should be naming our new cyberQuarter hub in her honour. Encouraging more women to take up careers in the tech sector is an important area of work for the University and I hope that Annie’s achievements, both in academic and political terms, can become a source of inspiration for others.” 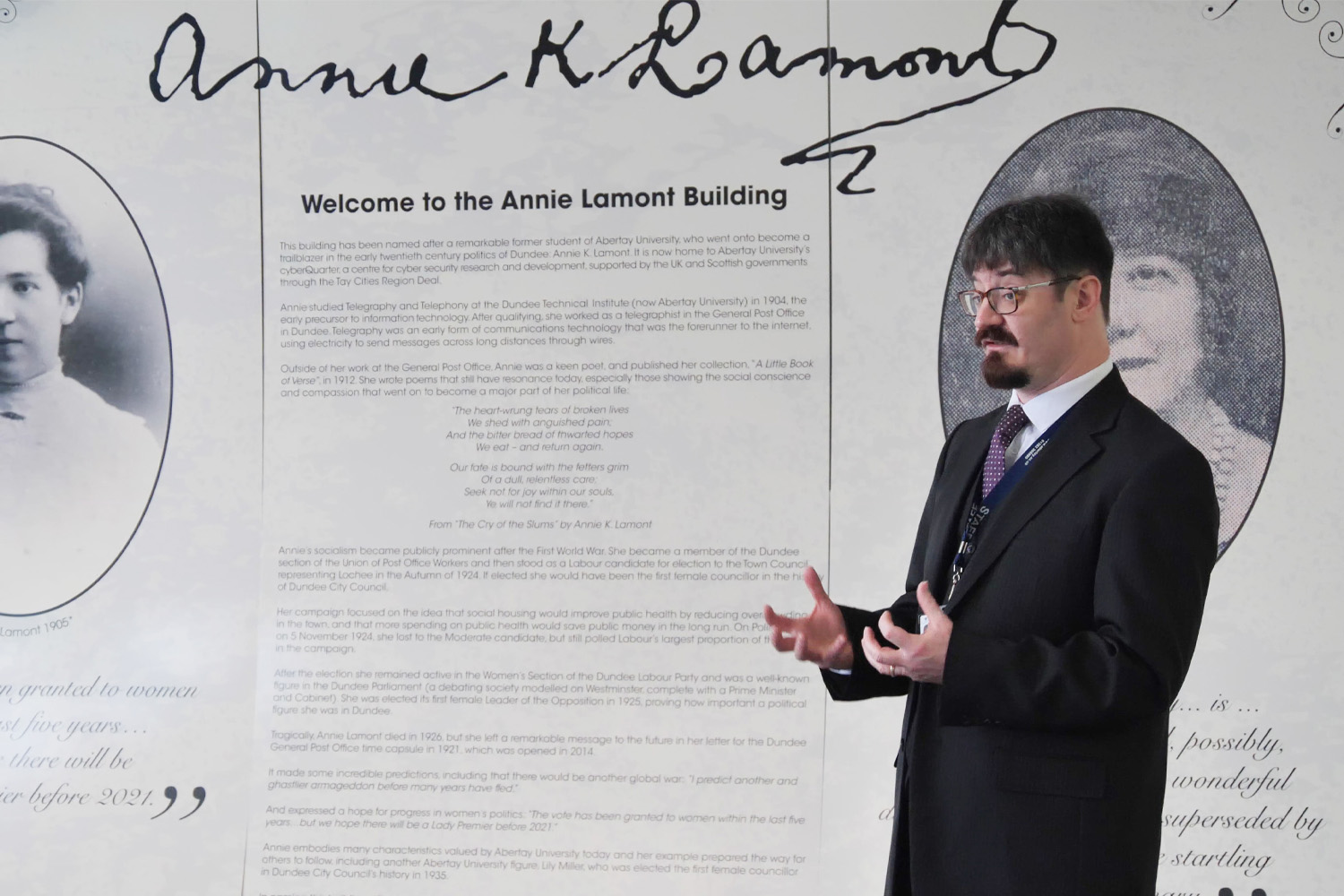 Ruaraidh Wishart, Abertay University Archivist said: “I’m delighted that the University has been able to trace one of its remarkable former students through its rich archives and the excellent work that was done researching her story further with schools through the Abertay 25 Project. I hope that the decision to celebrate her life in this way will make her story more widely known and will inspire our students and the people of Dundee in many years to come.”

Robyn Thiel, Abertay Student President said: “I’m really pleased to see the University recognising a prominent graduate in this way. I believe it’s very important to keep the history of the institution alive and also to remember the significant contributions that our students make to the community and the University’s success.”

Annie first became a member of the Dundee section of the Union of Post Office Workers following the First World War and then stood as a Labour candidate for election to the Town Council, representing Lochee in the Autumn of 1924. If elected she would have been the first female councillor in the history of the local council.

Her campaign focused on the idea that social housing would improve public health by reducing overcrowding in the town, and that more spending on public health would save public money in the long run. On Polling Day on 5 November 1924, she lost to the Moderate candidate, but still polled Labour’s largest proportion of the vote in the campaign.

After the election she remained active in the Women’s Section of the Dundee Labour Party and was a well-known figure in the Dundee Parliament (a debating society modelled on Westminster, complete with a Prime Minister and Cabinet). She was elected its first female Leader of the Opposition in 1925, proving how important a political figure she was in Dundee.

Tragically, Annie died in 1926, but her message to the future, which came back to light when the time capsule was opened in 2014, brought her name back into the public eye.

Dee Neilson, Modern Studies teacher at Grove Academy said: “We were delighted to be involved in the initial Abertay25 project exploring the University’s history, and we are proud that Grove Academy pupils have had the opportunity to help preserve Annie Lamont’s important achievements. Annie was a role model for women in both technology and politics, and our pupils have very much enjoyed learning about the influence she had on Abertay and the city of Dundee.”

Gabrielle Prudom, S5 pupil at Grove Academy said: “It’s great that the new cybersecurity centre and social space at Abertay is going to be named after Annie Lamont, and it was really interesting to learn more about her past and her political campaigning. I hope that this project will help her story to live on into the future.”

Annie embodies many characteristics valued by Abertay University today and her example prepared the way for others to follow, including another Abertay University figure, Lily Miller, who was elected the first female councillor in the local council’s history in 1935.

Outside of her work at the General Post Office, Annie was a keen poet, and published her collection, ‘A Little Book of Verse’, in 1912, including many poems displaying the social conscience that informed her politics.

Her skill in writing also shone through in her letter, which ends, despite her having lived through the First World War and a global pandemic, with a positive message:

“Let us hope that Browning’s beautiful world will come true and that we will ‘Emerge one day’.”