A new £5.5m videogames and cybersecurity space at Abertay University has been hailed “an important investment in Scotland’s future”.

Scottish Government Cabinet Secretary for Finance, Economy and Fair Work, Derek Mackay was in Dundee to officially open the School of Design and Informatics at Abertay, Europe’s top-ranked University for videogames education.

An Emergent Technology Centre (ETC) is at the heart of the teaching and research facility, featuring:

The University’s long-standing relationship with Sony Interactive Entertainment will continue into this new era for Abertay, with PlayStation development tools to be used within the labs. 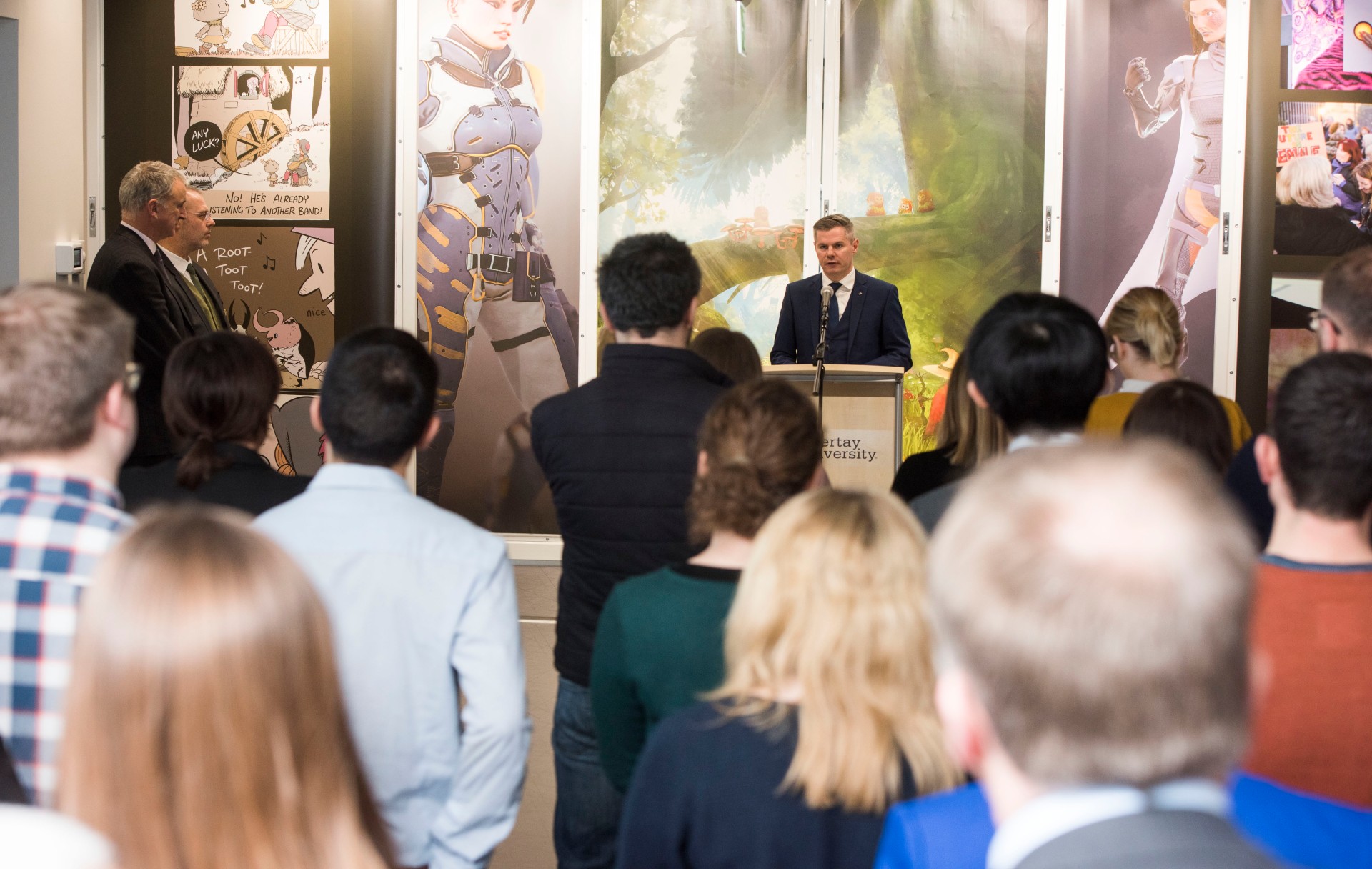 A teaching and study zone for the University’s Professional Masters in Games Development has also been included in the build, providing a first-class learning environment for students as demand to study at Abertay increases from China, North America and India.

A specially-commissioned game to open the space was created by Dr Niall Moody, Dr Lynn Love, Robin Griffiths and Gerry High, based on Ursula's artwork.

Abertay funded the majority of the project from its capital budget, with a Scottish Funding Council interest-free loan contributing towards ‘green’ measures, including solar roof panels.

The opening of the new School adds further weight to Dundee’s tech cluster, with Abertay already leading both the £11.5m InGAME (Innovation for Games and Media Enterprise) R&D project based at the Vision Building, and the £11.7m cyberQuarter project, an academic and industry collaboration to be funded through the Tay Cities Deal.

Professor Gregor White, Dean of the School of Design and Informatics, said: “This incredible new space indicates the strength of Abertay’s commitment to excellence in the tech sector, providing a first rate learning environment for our students and top class research space for our academics. Our distinguished track record in games and cyber education means we attract some of the world’s best student and academic talent so, as an institution, it’s important we stay right on the cusp of new and emerging technologies. This investment will allow us to do just that.”

Cabinet Secretary for Finance, Economy and Fair Work Derek Mackay said: “Abertay University’s School of Design and Informatics, and in particular its Emergent Technology Centre, represents an important investment in Scotland’s future. The new state-of-the-art facilities will help to develop talent in the videogames and cybersecurity sectors, as well as attract the best talent from around the world. The videogames and cybersecurity industries are two international sectors which have enormous potential for growth so it is great to see universities like Abertay playing a key role and ensuring Scotland is able to take full advantage of that.”

Luke Savage, Senior Academic Development Manager for Sony Interactive Entertainment said: “Abertay’s name is synonymous with excellence in international videogames education and we are delighted to be continuing our partnership with the University as its School of Design and Informatics enters this exciting new phase.” 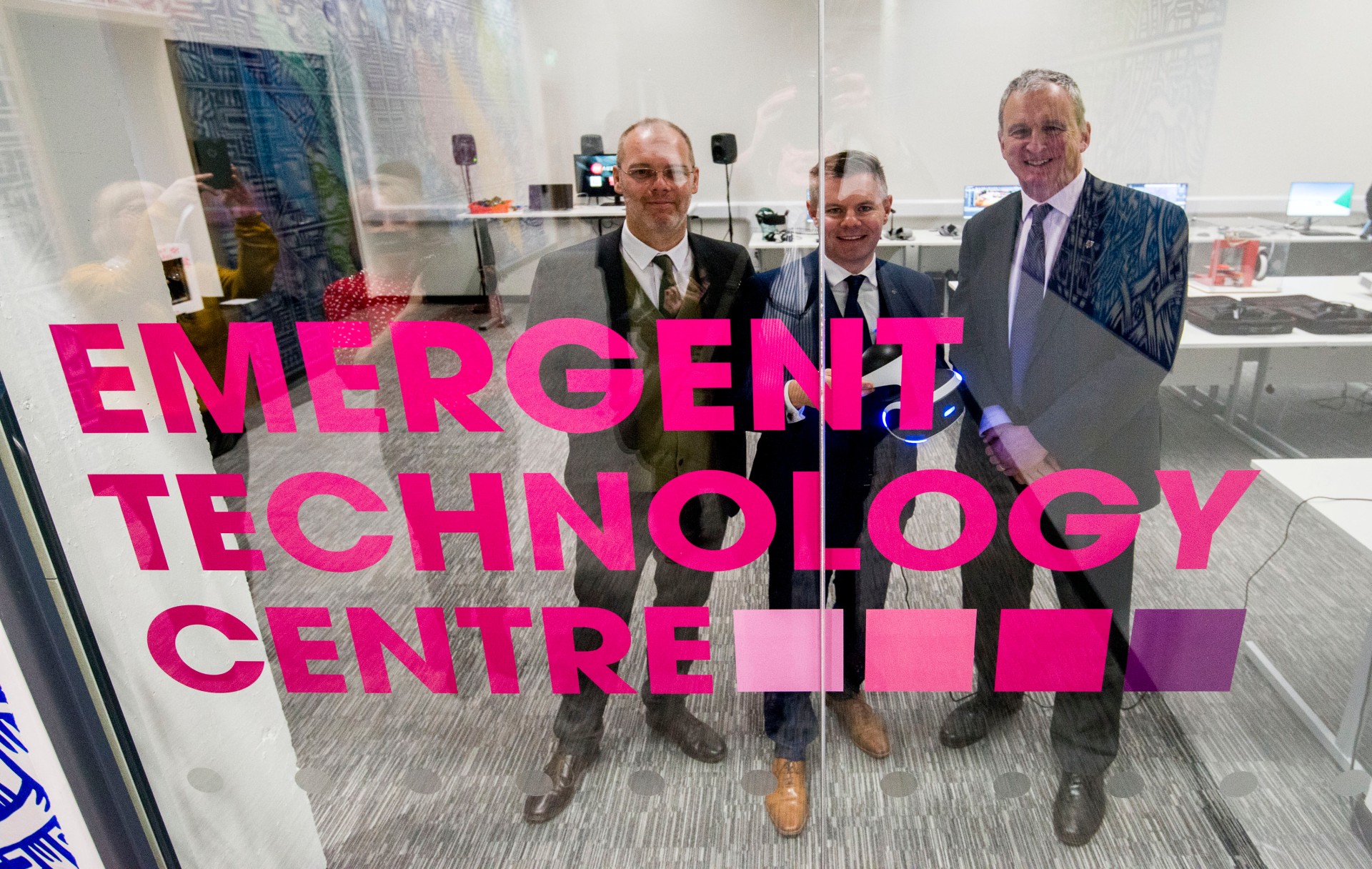 Abertay launched the world’s first videogames degree in 1997 and has since been at the forefront of the rapidly-growing industry, now worth more than the film and music industries combined.

Earlier this year, the Princeton Review ranked Abertay the number one University in Europe for undergraduate videogames degrees for the fifth consecutive year, and within the global top ten at postgraduate level.